Hole SIE-18-3 was drilled to the east of the historic Myrgruvans Mine, in an area that was previously untested by drilling. However, magnetic surveys in early 2018 showed a strong anomaly in the area, which was generated by the nickel bearing pyrrhotite-rich mineralization intercepted by hole SIE-18-3. The target remains open along strike and at depth.

Hole SIE-18-4 was drilled in the vicinity of another strong magnetic anomaly, further to the west along the mining trend. Mining maps from the area showed historic workings extending to a depth of 40 m in the area. However, hole SIE-18-4 entered mine workings at 76.8 meters depth, and was lost when drilling could not continue through a stope. Thus, mining in the area continued to significantly greater depths than had been indicated by the historic records.

Hole SIE-18-5 was drilled from the same drill pad as SIE-18-4, but was set back 7.5 meters and drilled a steeper angle. The hole intercepted pyrrhotite-rich mineralization 13.0 meters averaging 0.32% nickel and 0.28% copper and 0.034% cobalt and 0.32 ppm platinum + palladium (true widths interpreted to be 55-65% of the interval). This confirmed the presence of mineralization extending below the mine workings, and the likely source of the magnetic anomaly. Further, the thickness of massive and semi-massive sulfide in hole SIE-18-5, along with brecciated textures suggest that the mineralization may be broadening at depth.  The target remains open at depth and along strike.

Jason Gigliotti, President of Sienna states, “We are pleased with the initial drilling results.  We plan to continue to establish the origin of the positive indicators and focus on expanding the scope of the project in the summer.” 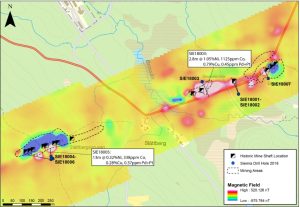