Sienna Resources (SIE—TSX.v) (A1XCQ0 –FSE) (SNNAF—OTCBB) is pleased to announce that it has engaged Protek Norr AB of Sweden to drill Sienna’s Slättberg Cobalt-Nickel-Copper Project in Sweden.  Drilling is expected to commence shortly.

Jason Gigliotti, President of Sienna states, “We are very optimistic about the Slättberg Cobalt-Nickel-Copper Project.  We are pleased to secure Protek as they have a strong local knowledge of the terrain and geology.  We anticipate the commencement of the drill program shortly.  Recently BMW announced they are looking to secure a long-term supply of battery metals such as lithium and cobalt, as it moves to secure raw materials for its push into electric vehicles over the next decade.  The world is moving electric and we want to position Sienna to be at the forefront of this battery metals revolution.”

Earlier this week Sienna significantly increased its acreage on its Slättberg Cobalt-Nickel-Copper Project.  The Slättberg Cobalt-Nickel-Copper Project now consists of 3 exploration licenses covering 12,733 acres and at least 16 historic mines, with 1 being the historic Mårtanberg copper mine, which was operated in the late 1700’s and early 1800’s. The Mårtanberg field is known for its copper-rich skarn-style mineralization. The underground workings extended to depths of 80-100 m, and little to no modern exploration has been conducted in the area.   We plan to bring modern techniques and views to this added acreage.

On January 30, 2018 we announced that initial results have been received from the ongoing magnetic survey work on the Slättberg Cobalt-Nickel-Copper Project in Sweden. High resolution magnetic surveys in the area of historic nickel-copper-cobalt mines have defined multiple strong magnetic responses along the trends of mineralization. These areas of strong magnetic response are interpreted to represent steeply plunging bodies of massive sulfide mineralization that is rich in pyrrhotite. The magnetic data appears to confirm additional continuity of drill defined zones of mineralization known from the historic drilling. Along with the historic drill data, this new magnetic data is being used to define multiple high priority drill targets for the upcoming drill program.

Slättberg’s massive sulfide mineralization is known to be strongly magnetic, owing to its high concentrations of pyrrhotite, a magnetic ferrous sulfide mineral associated with the Co-Ni-Cu mineralization. The new magnetic data is being used to potentially generate additional high priority drill targets on the project. 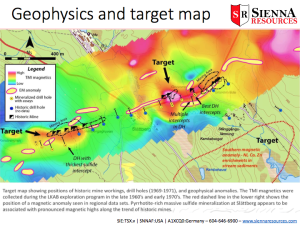