Sienna Resources (SIE—TSX.v) (A1XCQ0 –FSE) (SNNAF—OTCBB) is pleased to announce it has entered into an exploration and option agreement (the “Agreement”) with EMX Royalty Corporation (EMX–NYSE (American) TSX.v) to acquire the Slättberg Cobalt-Nickel-Copper Project in Sweden (the “Project”). The Project consists of two adjacent exploration permits comprising approximately 9513 contiguous acres.

Slättberg is located 25 kilometers northwest of Falun, Sweden. Slättberg is a historic mining camp hosting cobalt-nickel-copper rich massive sulfide mineralization that occurs within a two kilometer belt of historic nickel-copper mines. The Project contains drill defined massive sulfide mineralization that extends to ~100 meters in depth, and remains open for expansion at depth and along strike.  The Project is accessible year round, with nearby rail, power and 5 smelters in the Nordic region.  At least 12 historic mines are located on the property, with historic operations dating back to the late 1800’s. 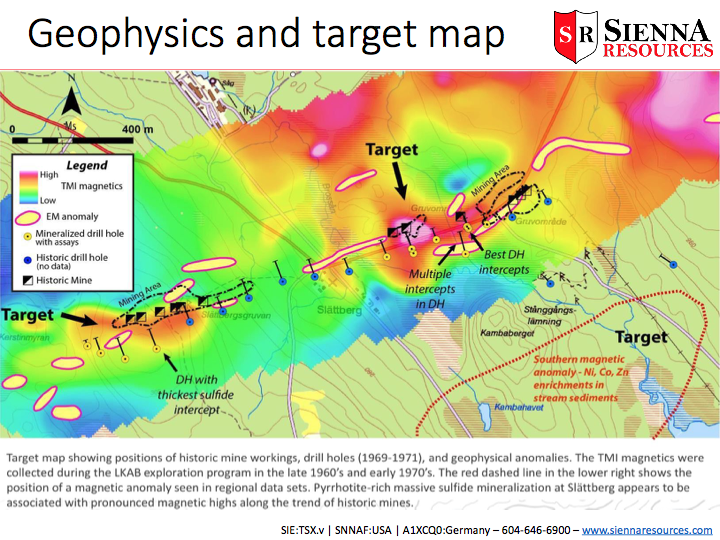 Jason Gigliotti president of Sienna states, “We are very pleased to have the opportunity to have access to this project. We are positioning Sienna ‘at the forefront of the battery metals revolution.’ This new project lies within one of the top mining jurisdictions in the world with significant mining history. The infrastructure is as good as any drill target I have seen. There are paved roads within metres of planned drill targets and this prospect is accessible year round. This new cobalt-nickel-copper prospect houses 12 past mines and we are optimistic about what new mining techniques could achieve. We expect to be drilling this property early in 2018. When you couple this new project with our ‘Clayton Valley Deep Basin Lithium Brine Project’ in Nevada, it is clear that Sienna is focused on the battery metals space.  Management is looking forward to a very active 2018 season and we are very optimistic about the future growth of the company.”

Northvolt is planning to be the largest battery factory in Europe at roughly the same size as Tesla’s Gigafactory. Jason Gigliotti states “Northvolt wants to locally source as much battery material as possible such as cobalt and nickel. There are now more than 20 mega battery factories currently being planned or constructed globally, creating a massive demand on the battery metals such as lithium, cobalt and nickel. Sienna is focused on exploring and developing projects that will meet this insatiable demand.”

Pursuant to the Agreement, Sienna can earn 100% interest in the Project through the issuance of shares to EMX and conducting exploration work during the one-year option period, as described below (all dollar amounts in CAD):

• On signing the Agreement, Sienna will issue to EMX 3 million common shares of Sienna stock.

• As a condition to the exercise of the option, Sienna must spend at least $500,000 in exploration expenditures on the project, including drilling of at least 750 meters.

Upon exercise of the option, Sienna will issue to EMX an additional 3 million shares of Sienna stock, and EMX will receive a 3% NSR royalty on the properties comprising the Project. Within six years of the execution of the Agreement, Sienna may purchase 0.5% of the NSR royalty for $1.5 million, leaving EMX with a 2.5% NSR royalty.

After exercise of the option, Sienna will use commercially reasonable efforts to raise $3,000,000 for development of the Project and other activities. Once Sienna has raised that amount, Sienna will issue an additional 4 million shares to EMX. Thereafter, EMX will have the right to participate pro-rata in future financings at its own cost to maintain its interest in Sienna.  All terms laid out here are subject to TSX Venture Exchange approval.