The Past Producing Bleka and Vekselmyr Orogenic Gold Projects, Norway

Sienna Resources (SIE—TSX.v) (A1XCQ0 –FSE) (SNNAF—OTCBB) (the “Company”) is pleased to announced that it has entered into an option agreement with EMX Royalty Corporation (EMX—NYSE, TSX.v) to acquire the “Bleka and Vekselmyr Gold Projects” in Norway.  These projects are greenstone-hosted gold systems in southern Norway (see Figure 1). In particular, the Projects were acquired on the basis of past gold production at Bleka from historic mining activities and the documentation of outcropping gold mineralization in orogenic-style veins at Vekselmyr. Both Projects contain extensions of the structures that host gold mineralization that have not been tested by historic exploration programs.  This now gives Sienna 4 separate projects in Scandinavia.

Jason Gigliotti, President of Sienna states, “This is a tremendous opportunity for Sienna to acquire a high quality gold project in a politically stable, mining friendly jurisdiction. We have been searching for a high quality, high potential gold project and we feel these two new gold targets provide this to Sienna immediately.  This gold belt has been underexplored and we plan to commence work right away.  There is a 3 km unique vein swarm within this greenstone hosted orogenic plug with a folded nose formation.  This area is highly prospective for gold and we plan to focus on this area.  We are extremely optimistic about Sienna’s short and long term prospects when you factor this new project coupled with work expected to commence shortly on our Finland and Ontario projects at a time when we just closed an oversubscribed placement of 2 million dollars.  Sienna will be very active at a time of historically high commodity prices, including gold recently making new all-time highs.”

Overview of the Project

The Projects are located in an underexplored greenstone belt in southern Norway with areas of historic gold production and documented gold occurrences. The Bleka Vein was discovered in 1880 and mined intermittently until 1940, with historic production reported as 165 kilograms (i.e., ~ 5,300 troy ounces) of gold sourced from mineralized material with an average grade of 36 g/t gold. The Bleka project covers the historic mining area and swarms of similar veins that extend for at least three kilometers along strike. The nearby Vekselmyr license covers outcropping gold mineralization in similar orogenic-style veins. 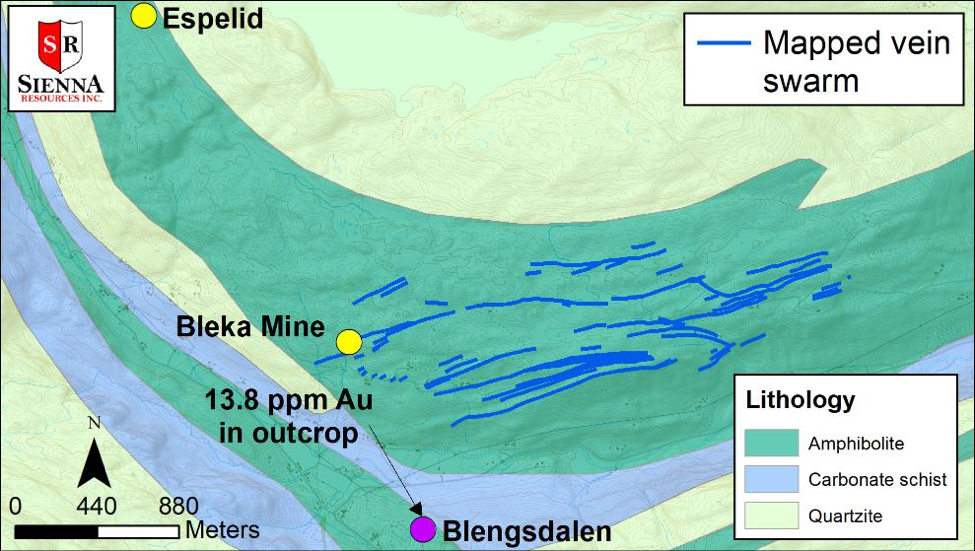 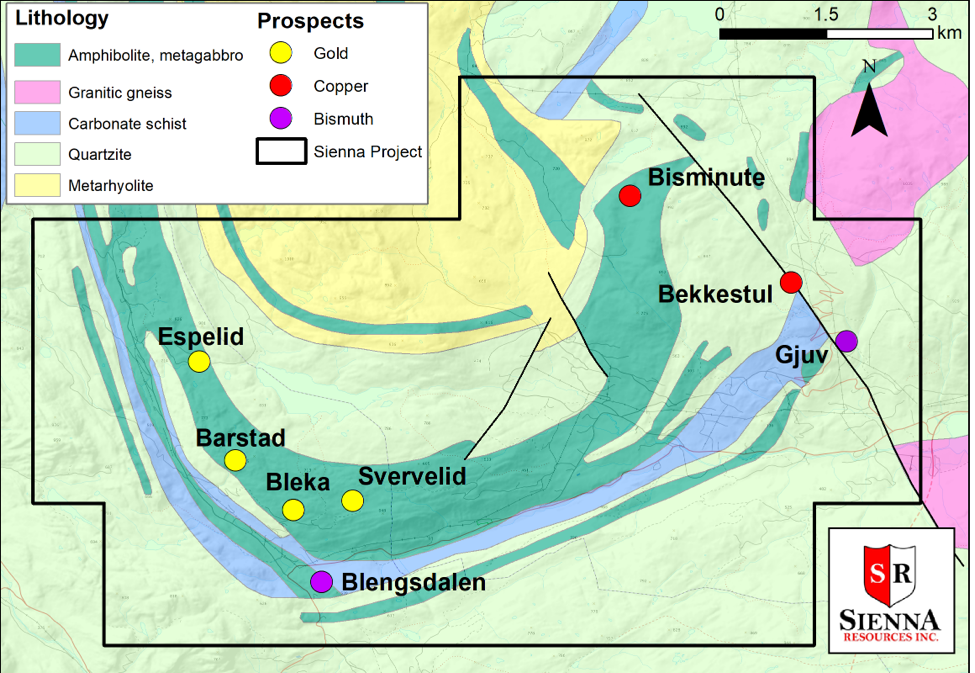 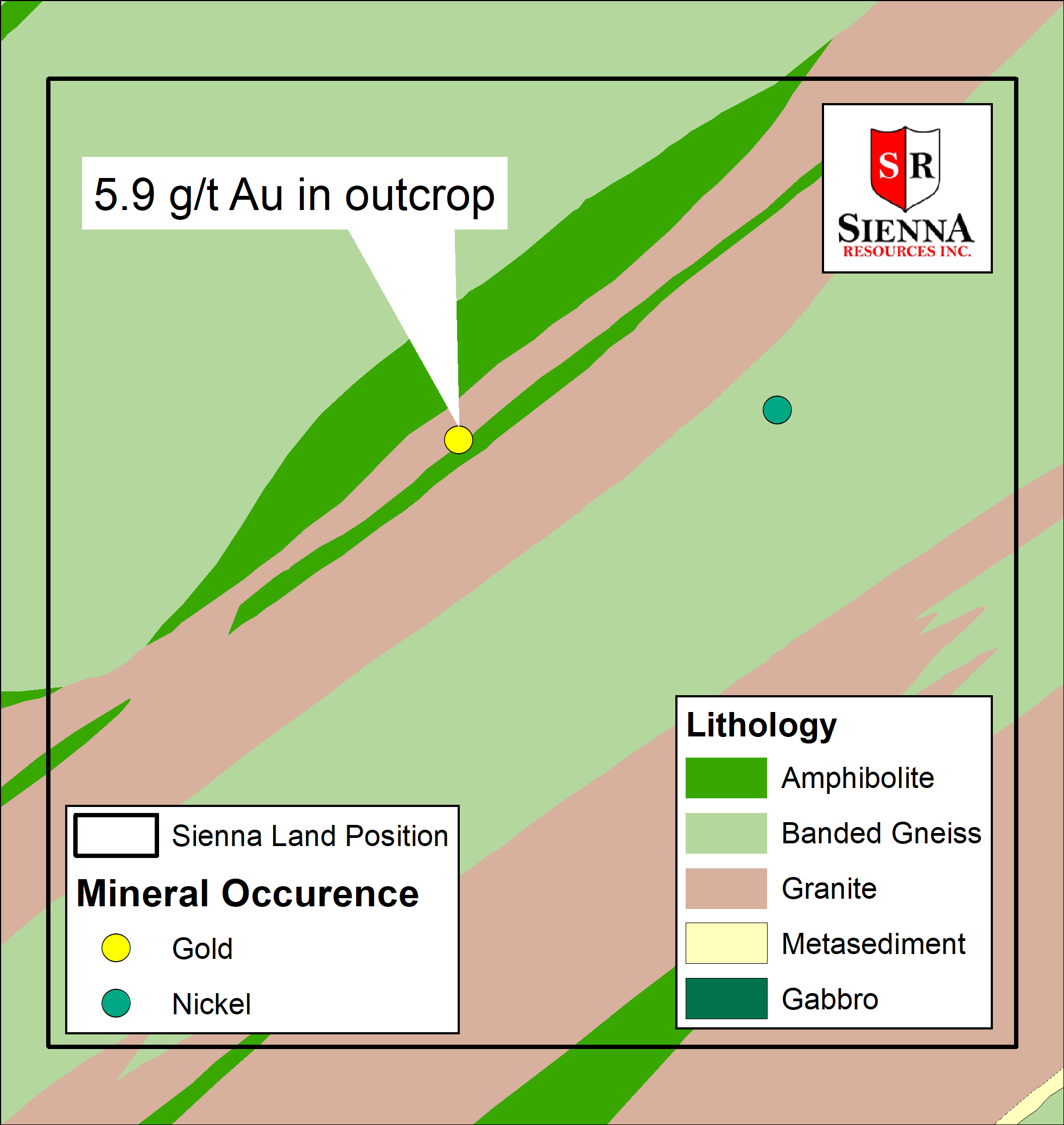 Vekselmyr Gold Project  *Historic assay values quoted above are from the NGU, from (Report No. 84-23-38, 1984). SIE has not performed sufficient work to verify the published data reported above, but SIE believes this information is considered reliable and relevant. (NGU Deposit Area 911-010)

Sienna can earn a 100% interest in the Bleka and Vekselmyr Projects in Norway, subject to 3% NSR royalty interests retained by EMX, by:

• Issuing an additional 500,000 shares of SIE to EMX within 5 days upon exchange approval,
• Spending a minimum of C$250,000 per year on exploration on the Projects over the next two years,
• Reimbursing EMX for its acquisition costs and expenses related to the Bleka and Vekselmyr Projects, and
• Issuing 1,500,000 additional shares of SIE to EMX at the end of the two-year option period.

If Sienna satisfies the earn-in conditions of the Agreement and elects to acquire the Projects, EMX will receive annual advance royalty (“AAR”) payments of US$25,000 for each property commencing on the first anniversary of the option exercise date, with each AAR payment increasing by US$5,000 per year until reaching a cap of US$75,000 per year.

Under certain conditions, 0.5% of the 3% NSR royalties retained by EMX can be repurchased by Sienna.

This agreement consists of an execution of an amendment to its option agreement with Sienna Resources Inc. (“Sienna”) (TSX Venture: SIE), originally signed in December, 2017 for the Slättberg nickel-copper-cobalt-PGE (Ni-Cu-Co-PGE) project in southern Sweden. The amendment adds EMX’s Bleka and Vekselmyr projects in southern Norway (the “Projects”) to the Option Agreement (the “Agreement”), whereby Sienna will enter a two year option period to acquire 100% interest in the Projects by satisfying work commitments and making payments of cash and equity to EMX, with EMX retaining 3% net smelter returns (“NSR”) royalty interests.

The technical contents of this release were approved by Greg Thomson, PGeo, a qualified person as defined by National Instrument 43-101.  *Historic assay values quoted above are from the NGU however SIE  has not performed sufficient work to verify the published data reported above, but SIE believes this information is considered reliable and relevant. 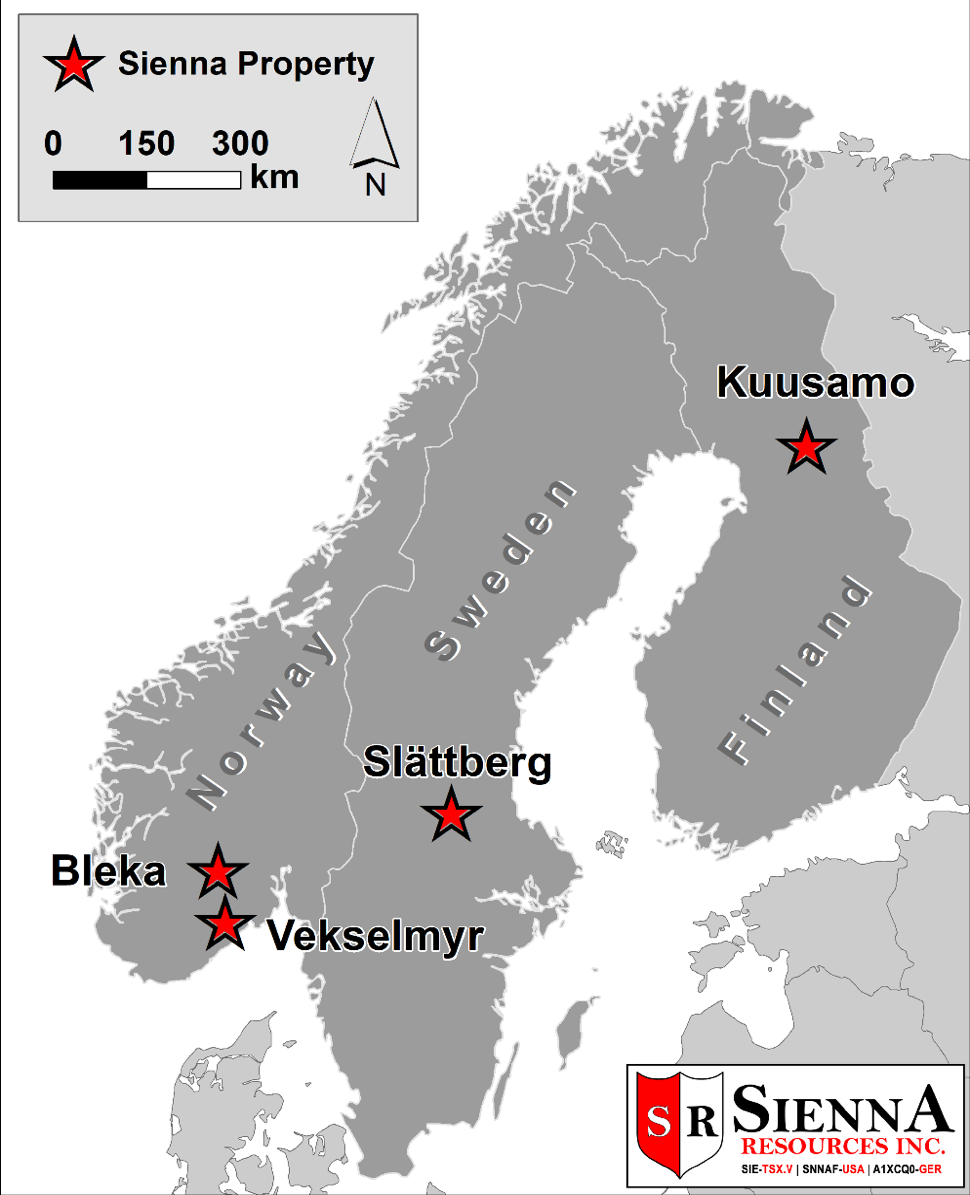